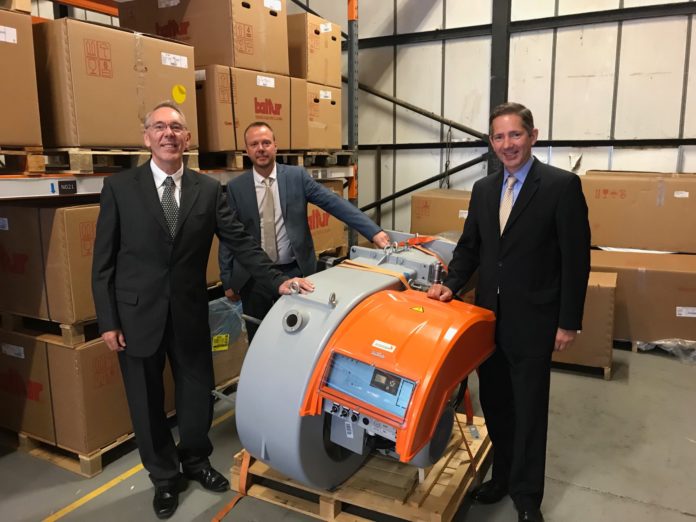 Mr Djanogly was welcomed to EOGB by Managing Director Paul Barritt and Technical Director Martin Cooke, where he received a tour of the facilities and learnt about the company’s new blue flame domestic oil burner, Sapphire, which is due to be in production later this year.

The Sapphire burner not only satisfies the new NOx standards set by the Energy Related Products (ERP) Directive from September 2018, but also meets the even lower 2022 requirements well ahead of time.

Unlike other low NOx burners, Sapphire has a fully-modulating operation to deliver ultra-high efficiency. It is also fully integrated with OpenTherm technology which can be connected to a range of advanced in-home controls to further drive up efficiency, and offers a gateway to SMART interactive systems previously not available on oil fired installations.

The Sapphire burner has also been successfully tested using HVO (Hydrotreated Vegetable Oil) as an alternative to oil. This work supports OFTEC’s proposals to decarbonise the UK’s 1.5 million off-grid homes by converting them to a low-carbon liquid fuel, a goal that supports the government’s Clean Growth Strategy ambitions.

Jonathan Djanogly MP said: “It was a pleasure to visit EOGB and to see the positive innovation which is happening in this region. As an MP with a largely rural constituency I was very interested in seeing EOGB’s developments in off-grid heating technology and hear how these can help to address carbon reduction targets in the UK.”

Martin Cooke, Technical Director at EOGB, said: “We know there’s plenty of life left in the oil-fired heating industry and innovation plays a pivotal role in securing its future. We’re very grateful to our local MP for visiting EOGB to see our new technology in action and learn about how it can support government plans to decarbonise heating in rural areas.”